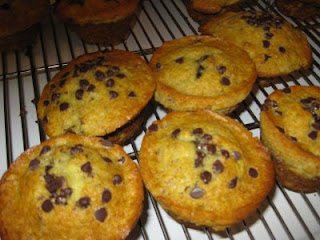 This morning, Claire needed something to bring to share with her skating friends for an early practice, so I made them a batch of Banana Muffins from More Muffins (Leslie Weiner and Barbara Albright). They were supposed to be muffins with a streusel topping, but I opted to sprinkle some mini chocolate chips on top instead. By the time I got there to pick up Claire, the muffins were gone. I understand they were good. (Should have saved one for myself!)
Posted by Chris H. at 2:43 PM No comments: 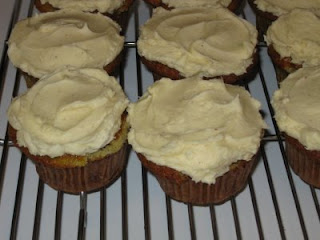 Despite getting home on the late side last night, I decided to throw together a quick batch of Banana Cupcakes (from Julie Hasson's 125 Best Cupcakes) for a meeting I need to attend this afternoon. In one of my should-have-known-better moments, I overfilled the cupcake liners a bit, and a few of the cupcakes overflowed, leaving the edges to bake on top of the pan. Subsequently, there was some untoward damage to a few of them during the depanning stage of the process. (When writing about this type of thing, I strive to use passive voice during the "I messed up" portion of the endeavor.)

At the moment, the cupcakes are unfrosted, but I think I can whip up a quick batch of buttercream before the meeting. (I ended up flavoring the buttercream with a little nutmeg, which goes really well with the banana and chocolate.)
Posted by Chris H. at 8:35 AM No comments: 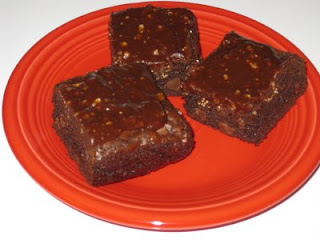 Yesterday, I had to get a couple of things ready for Lost Lunch Thursday and the PLTI class session. For Lost Lunch, I decided to try a brownie recipe that recently appeared at the King Arthur Flour blog. I'm pretty sure it's the same brownie recipe from their cookie cookbook, too. I'd always shied away from that recipe because it uses cocoa powder instead of unsweetened chocolate, and to me, that means a cakey brownie instead of a fudgy one. (Seriously, if I want chocolate cake, I'll make a cake, not a brownie.) I like some of the funkiness of the preparation technique for this recipe, namely melting the butter, then adding the sugar and heating up the combination to promote a thin crust on top of the brownie. I let the batter cool down for 20 minutes before I added the chocolate chips because I wanted them to retain their shape and not melt into the batter. When I spread the batter in the pan, I was encouraged by how thick it was, giving me hope for a fudgy brownie.

When all was said and done, I was surprised by how fudgy and, thus, acceptable these brownies are. They also got a big thumbs up from Claire, who enjoyed a couple of them. I guess she has gotten past the "I don't like nuts" phase. 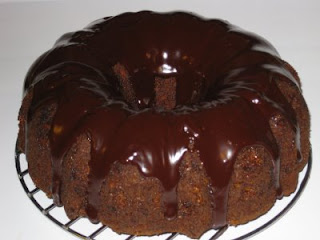 The PLTI cake this week is Banana Toffee Crunch Bundt Cake with Chocolate Glaze from Quick Chocolate Fixes by Leslie Weiner and Barbara Albright. The recipe calls for 5 1.4-oz. Heath bars, chopped, but I used an 8-oz. bag of chopped Heath bits, and that seemed to work fine. (Yes, I am still making my way through the bag of dented-and-dinged bananas. Only a few left!)
Posted by Chris H. at 9:06 PM No comments: 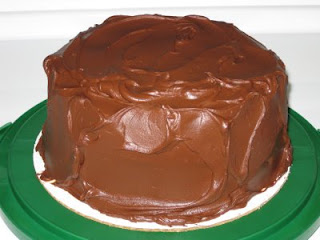 Once again, I was unable to resist the allure of a huge bag of bananas on the dented-and-dinged rack at Stew's. These bananas were very green at the time of purchase a week ago and only now are ripe enough for use in baking. Today, I tried a Banana Cake recipe from the new Dede Wilson birthday-cake book. The cake has some chopped toasted pecans and mini-chocolate chips in it. For filling between the layers, I used some leftover truffle base (dark rum and toasted coconut), and I frosted the cake with a mango-flavored ganache. I really like the voluptuous swirls in the frosting. I think I'll take this to work tomorrow for a belated Lost Lunch Thursday.

I'm not exactly sure what I'll do with the rest of the bananas, but I know I've got several things to bake for before the week is over. No doubt some (most? all?) of it will involve bananas.
Posted by Chris H. at 10:42 PM No comments: 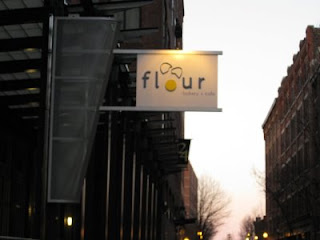 Last weekend, we spent a couple of days in the Boston area. Among our various stops, we paid a visit to Flour, a terrific bakery -- one of my absolute favorites. Since the last time we were there, Flour has opened a new location on Farnsworth Street, so we stopped in there. Part of the haul is shown below (counterclockwise from top left): a Scharffenberger double chocolate cookie, an oatmeal maple scone, a piece of apple snacking spice cake, a lime cornmeal cookie, and a small loaf of cherry-chocolate bread. We also brought home a small triple chocolate mousse cake; however, it didn't manage the travel home well. On the other hand, it tasted really good even after its structural integrity was compromised. 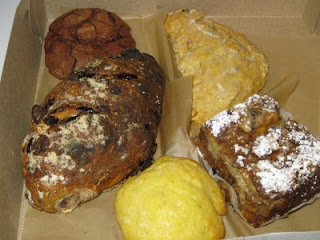 I'm really psyched because Joanne Chang, owner of Flour, is writing a cookbook. I'm pretty sure she was in an office at the Farnsworth Street location late Saturday afternoon. I wanted to shout out my enthusiasm and eagerness for the impending cookbook, but I figured that blogging about it was going to be geeky enough. (That said, Joanne, if you happen to Google yourself or Flour and you find this, rest assured that you have one cookbook buyer looking forward to the new book.)
Posted by Chris H. at 5:02 PM No comments: 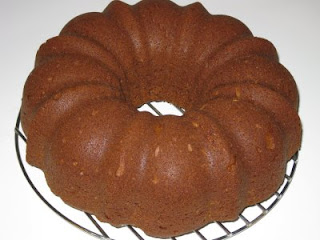 Last week before I decided that we should donate Karen's birthday cake to PLTI, I made a separate chocolate sour cream pound cake (from Quick Chocolate Fixes by Leslie Weiner and Barbara Albright) for the PLTI class. That left a balance of one unclaimed cake. To say thanks to our friend Patti for stopping in to keep an eye on the cat while we were away, I left the cake for her. In exchange, she left us some of her homemade biscotti (photo below). I like how this deal worked out! 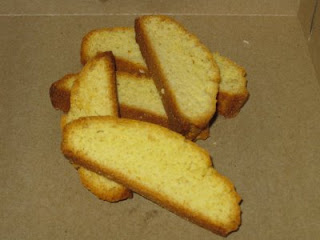 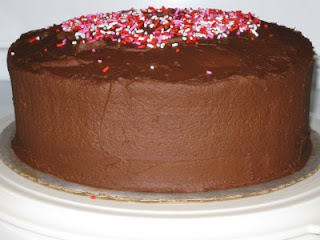 For Karen's birthday, I knew I had to make a cake that somehow involved chocolate. I decided to try something from Dede Wilson's latest book, The Birthday Cake Book. After perusing some chocolate-cake-with-chocolate-frosting combinations, I decided to make a yellow cake (with miniature chocolate chips in it) covered with chocolate frosting. Everything about the cake and the frosting came together really well, and it sure looked great when it was assembled.

Then we got home kind of late, plus had gotten dessert when we were at dinner. Believe it or not, the cake was never tasted. Knowing that we had plans that would leave us unable to dig in to the cake for a few days, we decided to donate it to the PLTI class this week -- with the promise that I'll make another one next week.
Posted by Chris H. at 11:50 AM No comments: 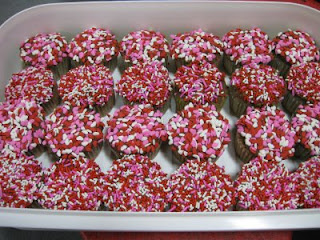 Today I brought some (early) Valentine's Day cupcakes to share with Claire's skating teammates. I used the strawberry cupcake recipe from Julie Hasson's 125 Best Cupcake Recipes. I've made that one before, and this time boosted the flavor with a bit of strawberry extract. With some chocolate frosting and sprinkles on top, they were good to go, and seemed to be pretty well enjoyed by everybody.
Posted by Chris H. at 10:27 PM No comments: 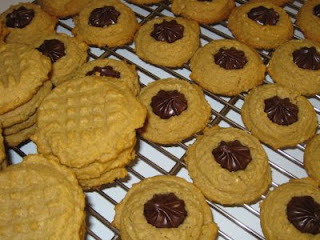 Last Wednesday's New York Times had a recipe for peanut-butter cookies, and I've been a bit fixated on making them since then. I decided to do part of the dough as straight-ahead peanut-butter cookies and half (or so) as peanut blossoms (mostly to use up a bag of chocolate stars). I think that both versions turned out pretty well.
Posted by Chris H. at 3:38 PM No comments: 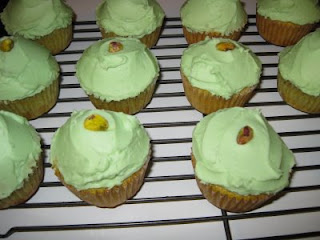 This week for Lost Lunch Thursday, we'll be having Pistachio Cupcakes, from a recipe in Julie Hasson's 125 Best Cupcake Recipes. They're frosted with a plain buttercream icing from the same book. I usually don't do this sort of thing, but I tinted the icing a light green to emphasize the pistachio theme. The cupcakes call for 1/2 cup of ground pistachios. To prevent them from turning into nut butter in the food processor, I ground them with a heaping 1/4 cup of the flour from the recipe. I'm already looking forward to lunch tomorrow.
Posted by Chris H. at 11:39 PM No comments: 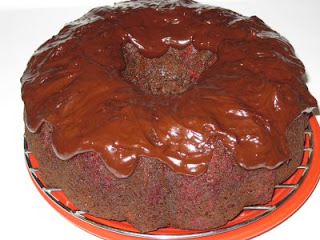 This week's PLTI treat is Darn Good Chocolate Cake from Chocolate from the Cake Mix Doctor by Anne Byrn. I've made this cake before, and it's not too bad. Instead of plain chocolate chips, I used some raspberry chips; the glaze is a lemon ganache. (That ganache had been intended to be truffles, but it never quite set up firmly enough to roll properly.)

I always feel a little sheepish about cake-mix things. However, on days like today, when there was more stuff to do than time to do it, a mix can come in handy.
Posted by Chris H. at 11:36 PM No comments: 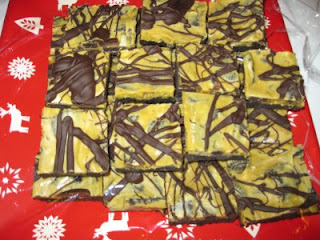 This year, our friends had their annual Groundhog Day party. Good fun as always, and as always, lots of good food, including some fantastic homemade vegetable soup. Somehow over the weekend, I completely lost track of the fact that today was Groundhog Day. It wasn't until fairly late last evening that I remembered I'd volunteered to bring a dessert. Focused on the need to make something quick, I turned to No Bake Cookies by Camilla Saulsbury. We'd tried a surprisingly good peanut-butter bar cookie from this book over the holidays, so I was up for trying a new recipe. I chose a cookies-and-cream bar cookie that largely consisted of a lot of ground-up Oreos, some making the base, some mixed into a creamy topping (vanilla pudding mix, powdered sugar, milk, vanilla, coarsely crumbled Oreos). I was alarmed when I tried a bit of the topping; it tasted overly sweet to me. Consequently, I chose to cut the bars into small squares. I think that might have been the absolutely right thing to do, too, because in the end, the bars weren't that bad. (What a ringing endorsement!) I got some positive feedback from guests at the party, so I guess that's good enough.

In keeping with the theme of the day, another guest brought some nifty cupcakes. Claire snagged one on her way out the door. (It might not look exactly like a groundhog, but it's the thought that counts!) 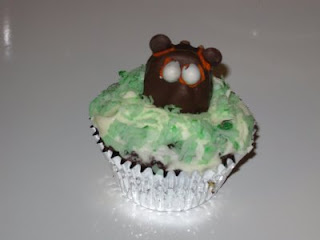