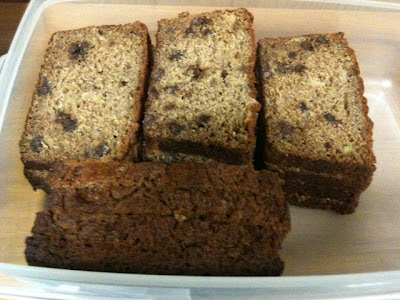 According to a Facebook post from the fine folks at King Arthur Flour, yesterday was National Banana Bread Day. (Who thinks of these things, anyway?) Since I'd just purchased some dented and dinged bananas, I was ready to roll and made this recipe, which I found at the King Arthur website. I didn't have apricot jam or orange marmalade on hand, so I used pineapple preserves instead. Also, rather than walnuts, I used sliced almonds and some milk chocolate chips. All in all, a nice loaf of banana bread.
Posted by Chris H. at 4:01 PM No comments:

For recipe No. 2 in the Tuesdays With Dorie exploration of Baking With Julia, we got to make Chocolate Truffle Tartlets. These small pastries have a chocolate crust containing with a rich filling of egg yolks, melted bittersweet chocolate, chocolate chunks (milk and white), and biscotti chunks.

Apologies in advance for not having properly documented the process in photos. I started off by making the crust. The recipe offers options for making the crust by hand or by food processor. Since my short, stubby Eastern European fingers lack the elegance and cool to prepare short crusts by hand, I knew I'd use a machine. Instead of the food processor, though, I used the KitchenAid mixer. It actually does a great job of blending together cold butter and dry ingredients.

After I added the liquid to the dry crust ingredients, I felt skeptical, especially as I faced a chocolatey-brown mound of crumbs on my marble pastry board. I gently worked the crumbs into a firm rectangle of dough, bound it in plastic wrap, and put it in the fridge.

Meanwhile, I prepped the filling ingredients and got them ready to roll. Given the number of egg yolks that the filling required, I foresee an angel-food cake in my future.

After a couple of hours, I got the crust out, let it warm slightly, then cut it into six pieces. The first one was a little fussy to work with, and I used too much flour when rolling it out. After that, though, the rolling went pretty well, and I had my six tartlet pans lined with dough. 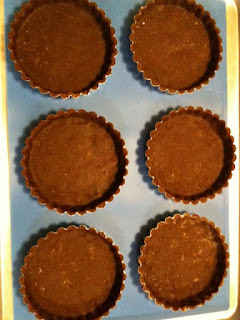 The crusts are baked for a bit, which gave me time to put together the filling. 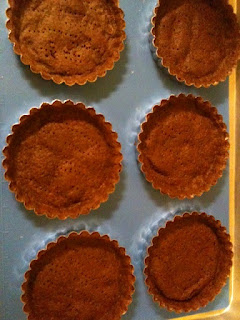 I think I ended up putting a bit more filling in each tartlet shell than the recipe called for, but that seemed to be OK ... 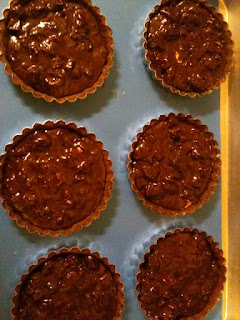 ... As nothing baked over while they were in the oven. 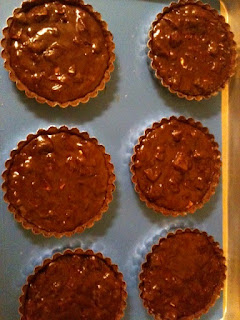 The recipe indicates that they're ready to eat after cooling slightly after they come out of the oven. Also, the recipe indicates that they're best eaten soon after they're baked. I assume that has to do with the slightly crunchy texture the biscotti chunks give the tartlet filling. We shared one tartlet warm. While they declared it rich, Karen and Claire really liked it. I actually felt sort of meh about it. Then I tried one the next day at room temperature and loved it. It's so rich that it needs some whipped cream (possibly even a little vanilla ice cream) to balance the blast of chocolate. Also, I think that one-half of a tartlet is the perfect portion.

Still, this is a really nice dessert, one that would be a great conclusion to an elegant meal of, oh, maybe broth and crackers because these tarts are so rich, I don't know what else would be light enough to consume beforehand. I've been thinking that the crusts would be good filled with a layer of ganache topped with some raspberries. I feel like it's been forever since I've made a pie-crust-style dough, and this was a good exercise in getting back to using those skills.
Posted by Chris H. at 5:57 AM 7 comments: 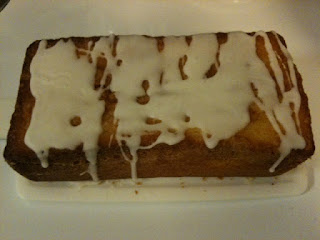 This week's PLTI snack offering, a lemon pound cake. The recipe made two loaves, so I had one to share with PLTI and one to share at work. I made the glaze with 1 cup of powdered sugar and 2 tablespoons of lemon juice.
Posted by Chris H. at 4:12 PM No comments: 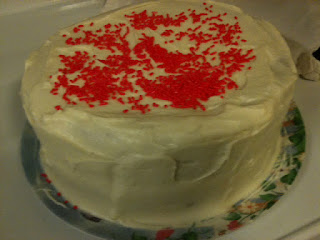 Last Saturday was Karen's birthday. Chocolate cake was required, so I relied on a tried-and-true favorite recipe from Lora Brody's Chocolate American Style. I'm dismayed by my sloppy frosting job here!
Posted by Chris H. at 4:01 PM No comments: 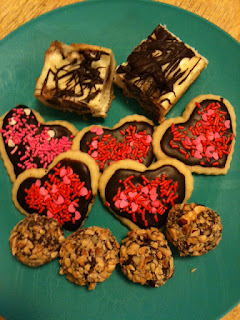 A variety of treats for Valentine's Day. The sugar cookies are from a recipe in Dede Wilson's Baker's Field Guide to Christmas Cookies. (That book is far too good to reserve for holiday-season use only.) The Nutella truffles and chocolate-chip cookie dough cheesecake bars are from the blog My Baking Addiction.
Posted by Chris H. at 3:59 PM No comments: 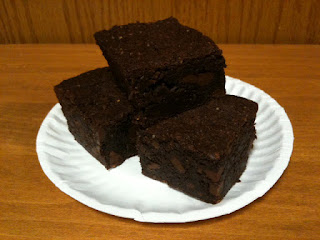 I thought I had a favorite brownie recipe ever. (That one, by the way, is also available in a nifty smart-phone app that lets you customize the brownie in a multitude of ways.) Then a friend emailed me this link, which was intriguing enough for me to test right away. I tried the new recipe with toasted pecans and really like the undertone that the ground pecans give the brownie. I'm now thinking how much fun it will be to try the recipe with different nut varieties (even with ground salted nuts to increase the salty-sweet contrast).
Posted by Chris H. at 3:44 PM No comments: 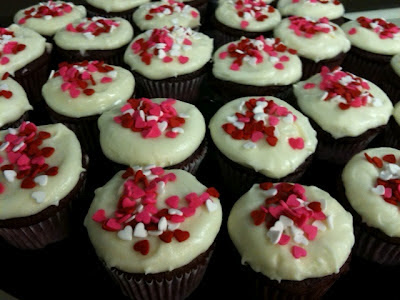 As I did a couple of years ago, I've been baking for the local class taking PLTI. Tonight for their snack, it'll be red-velvet cupcakes. I used this recipe for the cupcakes and this recipe for the frosting. To be honest, I don't get the passion for red velvet, but that might be because I've poured a small bottle of red food dye into an otherwise nice cake batter. I will say that these cupcakes turned out surprisingly good. While the batter was fairly thick, the cupcakes themselves are light and moist. The frosting is a little underwhelming, but I think that represents how I feel about cream-cheese frosting in general.
Posted by Chris H. at 8:03 AM No comments: 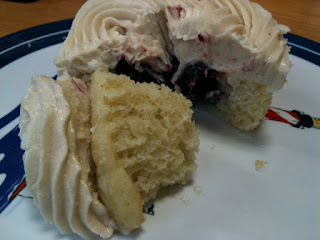 A couple of months ago, I downloaded a cupcake e-book and finally got around to trying this recipe from it. These cupcakes started with a batch of blueberry preserves, which I made for the filling. Next, the batter for the Buttermilk Pancake Cupcakes, which is in fact like pancake batter, very lean and light. Finally, the cupcakes are topped with a maple buttercream. I suppose that these cupcakes are like dessert for breakfast. All they need is a side of bacon.

All in all, despite some enthusiastic commentary about them, I'm not sure I'm 100% sold on them, probably because the cupcake texture wasn't too cakelike. Still, the combination of flavors and textures is pretty good.
Posted by Chris H. at 10:13 PM No comments:

So I had the best intentions when I started this blog, but as with many well-intended things (at least in my life), my blog has languished while I've been working, baking, running, skating, reading, and doing everything else I do. A couple of weeks ago, while reading another baking blog, I saw a reference to the Tuesdays With Dorie project, which was starting a new go-round of baking bloggers who'd be working from Baking With Julia. After thinking it over for a couple of days, I decided I'd give it a go and see if I could manage at least to keep my blog going by participating in this endeavor.

The first recipe from Baking With Julia is White Loaves, a yeasted bread. I've made plenty of bread, but to be honest, I'm pretty lazy about it these days. When I make bread, I tend to throw the ingredients in the bread machine, then dump the dough in a pan after the first rise, then let it rise again, then bake it off in the oven. Not someone to totally relinquish the lazy, I allowed my trusty nearly 21-year-old 5-qt. KitchenAid to mix and knead the dough. Based on the heat it generated, the KA has not had a workout like that in a while. Since I didn't have regular active dry yeast, I substituted rapid-rise bread machine yeast. I also used a blend of all-purpose and bread flours. Otherwise, I followed the recipe pretty much as directed.

For the first rise, I ended up with a nice blob of dough: 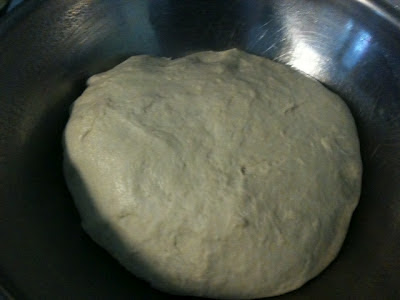 After the first rise, I shaped the dough. Shaping dough is something I've gotten -- surprise! -- really lazy about, so it was a good exercise to pay attention to what I was doing. I got a couple of nicely shaped loaves in the pans: 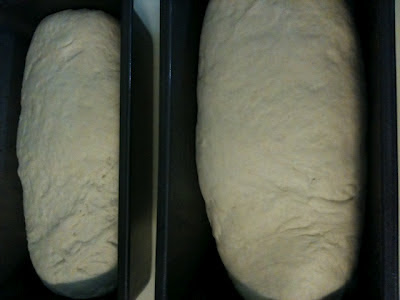 Because it was a little cool Saturday when I made the bread, I needed to let the dough rise a bit longer than the recommended 45 minutes. Although the recipe didn't offer this bit of direction, I slashed the top of each loaf so that the loaves wouldn't burst open as they rose in the oven. 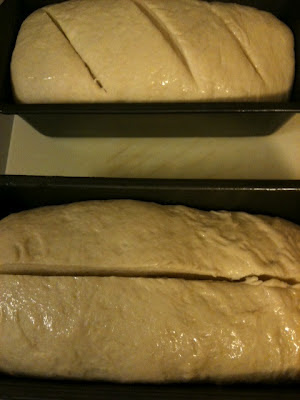 Apparently, taking a moment to shape loaves properly is a good thing. These two loaves are about the nicest looking ones I've made in ages. 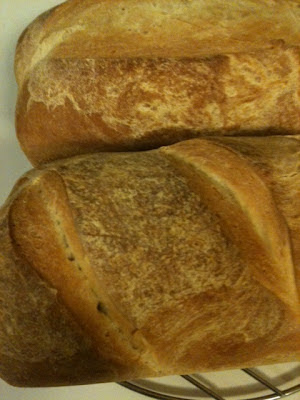 For an upcoming cupcake recipe, I made some blueberry jam today. Actually, I made a double batch, figuring that it would taste pretty good on a toasted slice of fresh bread. 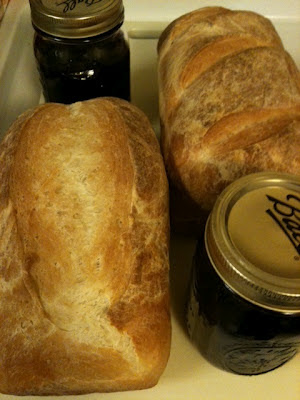