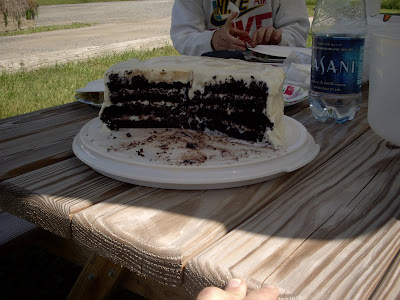 Today after our Sunday long training run at the lake, we (and our special guest, Ryan) had breakfast as usual, then celebrated Brendan's birthday, which is actually tomorrow (although cake doesn't know from dates).

For today's birthday cake, I made Best Birthday Cake from Lora Brody's Chocolate American Style. This cake was what I made for Karen's birthday this year, and I loved everything about it. The cake is incredibly moist, and the smooth ivory frosting is a perfect counterpoint to the deep chocolate richness of the cake.

The recipe calls for two 9-in. round pans for the batter. The first time I made the cake, I had to scramble to prepare a third pan because there was so much batter. I'd grabbed the regular thin nonstick cake pans instead of the heavier, taller aluminum cake pans, not realizing how much batter I'd be dealing with. I even made a note with the recipe that it required three pans. This time, I opted to use two deeper pans, which would allow me to split the cakes and to serve a four-layer cake.

The baking went just fine, but I think that the frosting recipe makes not quite enough to fill and cover four layers of cake. I ended up feeling that I had to make a half-batch of frosting to finish off the cake. There also were a couple of, um, structural mishaps in which portions on the edge of the top layer tore off the cake (I must have misjudged the halving of the top layer). Unfortunately, the frosting also became a bit slack from being in the car until after breakfast.

In the end, I think that henceforth, I will make this cake as a three-layer cake. I think I prefer slightly thicker, sturdier layers. I also suspect that the frosting recipe is better suited to three layers rather than four.

Regardless, this cake is really something special: rich, chocolaty, and (under ideal circumstances) great-looking.
Posted by Chris H. at 3:01 PM No comments: 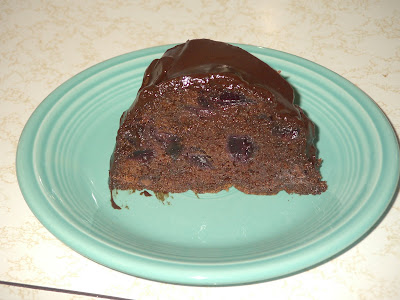 By this point, it should be evident that I adore The Cake. It's an amazingly adaptable recipe. Even as I prepared Versions 2.0 and 2.1 (pears instead of apples, then pears with crystallized ginger), I started looked forward to summer variations. Last night, I made The Cake Version 3.0: cherries. I used about 2 cups of quartered, pitted cherries. Instead of 1 tablespoon of vanilla extract, I used 2 teaspoons of almond extract and 1 teaspoon of vanilla. The glaze is the usual glaze I've been using for The Cake; for some reason, this batch came out thinner and shinier than usual.

Version 3.0 is extremely good. Chocolate and cherries are a great match, natch. And although I was slightly worried about pairing nutmeg and cinnamon with almond, the worries were unfounded. This chameleon of cakes rolls with whatever is tossed at it. I think it's safe to say that a raspberry edition will be in the works in a few weeks.
Posted by Chris H. at 10:09 PM 4 comments: 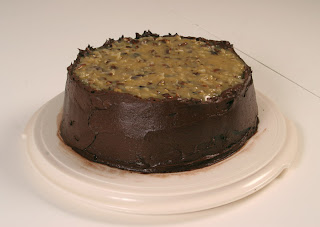 Today was a work birthday, and I think it's the first time I've ever gotten a cake request from the birthday celebrator. Krysta, our assistant art director, wondered if I'd consider making a German Chocolate Cake for her birthday. I hadn't made one in a while, and the idea seemed appealing. Rather than going too off the wall, I went with the traditional recipe. I used the compilation cookbook Birthday Cakes by Kathryn Kleinman, which contains a recipe by John Martin Taylor.

OK, there was one difference. The tweak I made was to add a band of fudge icing to the exterior of the cake. That treatment hearkens back to our days of living in Shaker Heights, Ohio. The Eddie Sands Blueline Cafe prepared their German Chocolate Cake that way, and I always loved that extra chocolate richness on the cake. I don't think I've made a German Chocolate Cake without the band of icing since then.

Many thanks to Krysta for taking this photo. I forgot to shoot the cake last night, and also forgot to bring my camera to work this morning. In case you think your eyesight is going, don't worry. The cake is a bit tall on one side. I should have leveled the layers, or been more attentive to rotating the pans in the oven. I think my oven has a wicked hot spot.
Posted by Chris H. at 12:56 PM 1 comment: 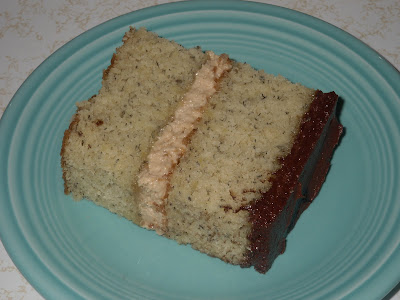 When the weather warms up, bananas ripen pretty fast. Consequently, I found myself with a bunch of ripe bananas, too soft to eat, but perfect for baking. I have a collection of favorite banana-based recipes that I often turn to, but in a moment of downtime earlier in the week, I dug up a banana cake recipe from the Better Homes & Gardens Web site.

On Tuesday, I made one 9x13 banana cake. I still had leftover ripe bananas, so on Wednesday, I made one more 9x13 cake with the intention of making a big layer cake. I made two different frostings for this concoction: the center is filled with peanut butter buttercream, and the top gets a chocolate fudge frosting.

The result? This might be one of my favorite banana cakes. Lots of banana flavor, due no doubt to the ripe fruit. The cake is remarkably tender and moist, too, a benefit of the way it's made; the butter and liquids are beaten into the dry ingredients, and then the eggs are added. It's a reverse-creaming technique. The only change I made from the original recipe was using butter instead of shortening as the fat in the cake. Assuming that the only reason shortening was called for was due to its softness, I let the butter sit at room temperature til it was soft. The butter adds some nice notes to the cake, much more pleasant than nondescript shortening would have been.
Posted by Chris H. at 4:44 AM 1 comment: 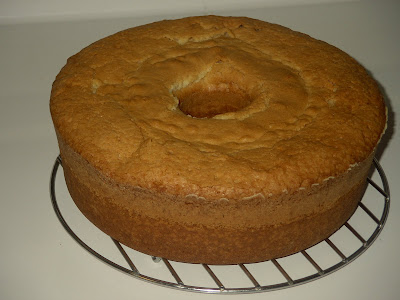 A week ago, Southern Cakes arrived in my mailbox, ordered from The Good Cook book club. (Sadly, their all-books-are-$10-each promotion ended, but I ordered this book on a buy-one-get-one-free sale.) Southern Cakes is a new book by Nancie McDermott. The timing of the book's arrival was perfect because I needed to make something for Karen to bring in Monday for a work birthday.

Sunday ended up being kind of a crazy busy day, and I didn't get around to starting the cake til evening. I figured I'd make a pound cake because it wouldn't require frosting or decorating, and since I had some cream cheese in the fridge, I decided to try Cream Cheese Pound Cake from this new book.

No chance to sample it, but it looked great out of the oven. When the cake dome came home empty, I figured that something must have gone right with the cake.

At this point, I need to spend a little more time getting to know this book. My immediate reaction was that it is full of recipes I really want to try. I'll take that as a good sign.
Posted by Chris H. at 4:43 AM No comments: 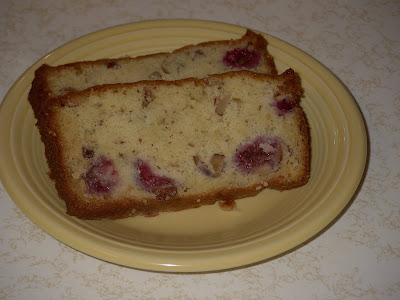 One of my first cookbooks ever was Judy Gorman's Breads of New England. Published in 1988 by Yankee Publishing Inc., this book was one of the prizes awarded to weekly winners of the Culinary Delights contest when I was the features editor at The Telegraph, the daily newspaper in Nashua, N.H. (If memory serves, I also used Mollie Katzen's Still Life With Menu as a Culinary Delights weekly prize. Reminds me that that book has a great recipe for marinated eggplant.)

I lived in a tiny studio apartment with a two-burner stove that barely worked. This appliance also lacked a functional oven, so I didn't do much baking. I remember attempting microwave muffins. Shudder. I didn't get to use Judy Gorman's book until I'd vacated my studio in Nashua for an apartment with working appliances in Hartford, Conn.

Breads of New England has a lot of recipes packed into its nearly 300 pages, covering a gamut of wheat-based things from yeast breads to quick breads to muffins to scones to pancakes to pizzas to doughnuts, and more. While I've actually tried a good number of recipes from this book, two that I've come back to time and again are Banana Chocolate Bread (a dense banana bread with chocolate chips) and Raspberry Almond Loaf.

The first time I made the raspberry loaf, I made it for Karen shortly after we'd started dating. She said she liked raspberries, and this bread looked like the epitome of elegance. It's a sour-cream-enriched quick bread with toasted slivered almonds and raspberries, goosed with extract to heighten the almond flavor.

Because this bread works best with fresh raspberries, I don't get a chance to make it often. But California raspberries have been on sale the past couple of weeks, so I decided it was time to make a loaf of this bread. Unfortunately, I had no slivered almonds; all I had on hand were unblanched whole almonds. I toasted 'em and chopped 'em up, but they're still a bit coarse for this delicate loaf.

Since this book is so long out of print, I'm going to share the recipe here.

In the bowl of an electric mixer, combine the butter and sugar. Beat at medium speed until light and fluffy. One at a time, add the eggs, scraping down the sides of the bowl after each addition. Blend in the almond extract. With the mixer on low speed, add the dry ingredients one-third at a time, alternating with the sour cream, and ending with the dry ingredients. Beat until moistened. By hand, gently stir in the toasted almonds and the raspberries.

Pour into the prepared baking pan and bake for 50 minutes to one hour, covering the loaf with aluminum foil for the last 10 minutes of baking to prevent overbrowning. The bread is done when a cake tester or wooden pick inserted in the center comes out clean. Let the bread cool in the pan on a rack for 10 minutes, then turn out of pan onto the rack. Let bread cool completely before slicing.
Posted by Chris H. at 8:50 PM 1 comment: 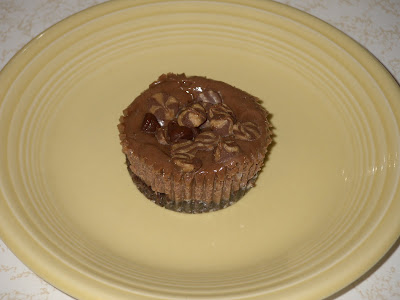 To celebrate the final week of this year's PLTI class, I made a special treat: Mini Chocolate Cheesecakes with raspberry-flavored chips. (Yes, the original Nestlé recipe calls for mint-swirled chips. Whatever.) The recipe is courtesy of Nestlé, and they seemed to be a hit with the class. It was kind of funny talking to a couple of the people from this year's class. They made some of the same comments that we had last year at the end of PLTI, including "I'm not sure what I'm going to do with my Thursday nights now." I'm going to back that up a day and say I don't know what I'll do with Wednesdays now that I won't have a specific event to bake for.

Baking for PLTI has been a pleasure. These folks have been an appreciative, enthusiastic audience, and it's been nice for me to feel like I've been a small part of helping them to enjoy this program.

Eagle-eyed readers might notice that the mini-cheesecake in the photo is not made with raspberry-swirled chips. In fact, the mini-cheesecakes were such a hit that I made a second double batch, this time using peanut-butter swirled chips. I also added about 1/4 cup of creamy peanut butter to the cheesecake batter, for a chocolate-peanut butter bit of excitement. The PB made the batter slightly thicker, but the end result was a tasty cheesecake.

If you don't want to click through, here's the cheesecake recipe:
Swirled Chocolate Mint Mini Cheesecakes

Bake for 18 to 22 minutes or until just set. Remove from oven to wire rack. Cool completely. Cover and refrigerate for at least 1 hour.
Posted by Chris H. at 6:14 PM 1 comment: