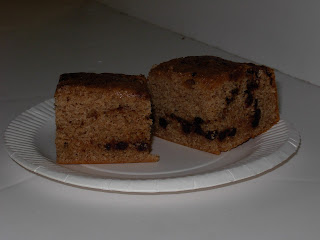 I really wanted to try this cake from Dorie Greenspan's Baking: From My Home to Yours because I loved the idea of the combination of espresso and cinnamon. Although the cake turned out fine, I definitely erred when putting the batter in the pan. The cake is supposed to have a layer of sugary-chocolatey-espresso goodness waving through the center. However, I cluelessly dumped all the batter in the pan, then sprinkled the filling on top of the batter.

On the plus side, I didn't feel obliged to make the suggested icing for this cake.
Posted by Chris H. at 10:00 AM No comments: 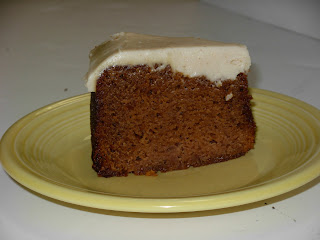 This cake came to be in a fairly roundabout way. I've been prowling the dented-and-dinged produce rack lately, and have gotten some great deals on bananas (there's a lot of banana-themed blog entries on the way), red peppers (which I used for stuffed peppers), and apples. I figured I'd use the apples (and a few pears) for a couple of batches of homemade applesauce. Since I didn't add any sugar -- I just cooked down the fruit with a little apple cider and a couple of cinnamon sticks -- I had unsweetened applesauce, perfect for a cake.

While browsing through the Holiday Baking special edition of Everyday Food, I saw this recipe for Applesauce Cake. This cake is spicy and moist, but there was a bit of a problem removing the cake from the pan. My gut instinct told me to line the bottom of the tube pan with parchment paper, and I didn't. I went with just the usual shortening-flour pan release. It was not adequate -- hence the coating of cream-cheese frosting on the cake. (In case you were wondering, yes, I had to serve it upside down.)
Posted by Chris H. at 9:59 AM No comments: 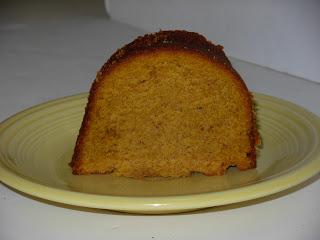 For Thanksgiving dessert, I didn't want to make a pie or a cheesecake, but I wanted something pumpkin. I settled on Pumpkin & Ginger Pound Cake. This recipe was published originally in Fine Cooking's October/November 2002 issue, and has recently reappeared in the collection How to Cook a Turkey. (This book is really terrific, by the way.)

It's unfathomable why I waited five years to try this cake. This cake has a gorgeous, fine crumb and a wonderful warm ginger flavor. I tweaked the recipe slightly and buzzed the ginger and the sugar in the food processor before I creamed it all with the butter to start the cake. I think that that helped to distribute the ginger flavor more evenly than simply adding in minced ginger. On the other hand, it's an extra step that I bet you wouldn't have to pursue to get a great cake.

Just for indulgent holiday fun, I had the cake with a scoop of this special flavor of Haagen-Dazs ice cream.
Posted by Chris H. at 9:58 AM No comments: 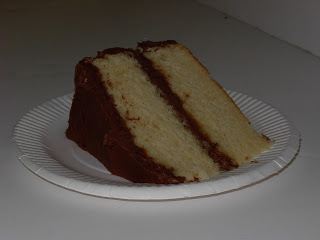 This one is from Marcy Goldman's new book, A Passion for Baking. The recipe is Classic American Chocolate Layer Cake, and that is maybe a bit of a misnomer: It's a yellow cake, actually, with chocolate frosting. In fact, it's a beauty of a yellow cake, with a tight crumb and a pound-cake-like texture. The creamy chocolate frosting is an ideal counterpoint.
Posted by Chris H. at 9:33 PM No comments: 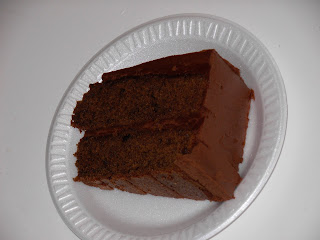 From time to time, I browse through the book archives, and inevitably while turning pages in a book, I’ll see a recipe and think, “Why have I never made that?” The coincidence of a book browse and the bottom of a container of whole milk nearing an expiration date led me to try this chocolate cake from Wayne Harley Brachman’s American Desserts, which was published in 2003.

Initially, I was afraid I’d overbaked the cake. At first testing, the layers were way not done. Five minutes later, they were quite done. I was almost afraid to slice it for fear that I’d discover a dried-out interior. As it turned out, the cake has a pretty dense, compact texture, almost more like a brownie than a cake. And it was plenty moist.

One thought: I wonder if a different liquid (say, cold coffee) might intensify the color and flavor of the cake. The frosting is nice and fudgy.
Posted by Chris H. at 9:32 PM No comments: 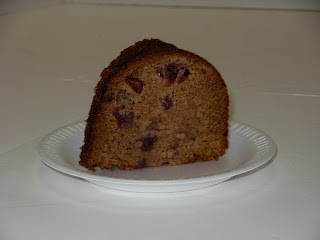 We started November with a couple of work birthdays within a couple of days of each other. For the first birthday, I made Golden Applesauce Pound Cake from Marcy Goldman's A Passion for Baking. I used some homemade applesauce for this cake. The recipe calls for golden raisins, which I didn't have, so I substituted dried cranberries. All in all, a nice autumnal cake.

For the second birthday, I made Banana Chocolate Chip Cake from Carole Walter's Great Coffee Cakes, Sticky Buns, Muffins & More. This cake is a trip. Based on the ingredient list, which includes cake flour and superfine sugar, I figured that this would be a cake with a fine texture. But never before have I gone the extra step of straining mashed bananas for a cake. In the end, I think it made a difference and contributed to the cake's silken texture. This is an excellent banana cake, strained bananas and all. 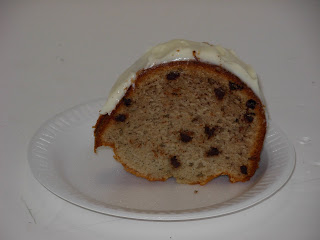 Today I hauled a bunch of baked goods in to New York City to share with some friends who are either running or spectating at tomorrow's NYC Marathon. In addition to some items I'd baked a couple of weeks ago and frozen, I supplemented with two additional items: Pumpkin Brownies (from a recipe I saw posted at Cookstalk, the forum at the Fine Cooking Web site), and Apricot Crumb Brownies from Baking from the Heart.

The brownies were OK, although I think they ended up just slightly overbaked. The recipe specifies a 50-minute baking time. I set the timer for 40 minutes and took the fully baked brownies out of the oven at 38 minutes. I think they could go a few minutes less. The flavor combination of the spicy pumpkin-cream cheese batter swirled into the brownie is really nice. Here's the recipe:

1. MAKE THE PUMPKIN BATTER: Preheat the oven to 350 degrees. Lightly butter a 13-by-9-inch baking dish. In a small bowl, using an electric mixer, beat the butter with the cream cheese until smooth. Beat in the sugar, scraping the bowl occasionally. Beat in the egg, then add the pumpkin puree, vanilla, cinnamon and ginger. Stir in the flour.
2. MAKE THE CHOCOLATE BATTER: Combine the semisweet chocolate and butter in a medium bowl. Set the bowl over a saucepan with 1 inch of simmering water and stir occasionally until melted. In a large bowl, combine the eggs with the sugar, vanilla and salt; set the bowl over the saucepan of simmering water and, using an electric mixer, beat at low speed until blended. Increase the speed to mdeium and beat until the mixture is warm to the touch. Remove from the heat and continue to beat until the mixture is think and fluffy, about 5 minutes. Using a large rubber spatula, fold in the melted chocolate. Sift the flour over the warm batter and fold it in just until combined. Fold in the walnut pieces.
3. Spread the chocolate batter evenly in the prepared pan. Using a tablespoon, drop dollops of the pumpkin batter all over the top. Using the back of a butter knife, swirl the pumpkin batter into the chocolate; don't overdo it or the swirl pattern will be lost. Bake for about 50 minutes, or until skewer inserted in the center comes out clean. Let the brownies cool completely before cutting.

Then there were the Apricot Crumb Bars. They're a Susan Purdy recipe contributed to Baking from the Heart, a book published in support of Share Our Strength. These bars are instantly one of my favorite bar cookies ever. Resting on a shortbread base, there's a layer of semisweet chocolate topped with a layer of apricot (both preserves and plumped, pureed dried fruit), and finally with an oat-and-walnut-studded crumb topping. I didn't have quite enough dried apricots for the fruit layer, so I supplemented with a bit of dried mango. The mix of textures and flavors (shortbread, chocolate, fruit, nuts) is brilliant. I'm already thinking about variations for this bar cookie (like maybe dried cranberries with a layer of white chocolate).

(Apologies. I have no photos of the brownies or the apricot bars. They were distributed and devoured -- I hope -- before I could take a photo.)
Posted by Chris H. at 7:14 PM 1 comment: