For our second Tuesdays With Dorie assignment for September, we made whole wheat bread. This recipe was really straightforward and easy to make. I loved the way the bread turned out. At some point, I will try it! Due to scheduling issues, I ended up making the bread, slicing it, then freezing it. On the one hand, lame! On the other hand, I have two beautiful loaves of bread in the freezer. Can't beat that.

Henceforth in my blogging, I am going to label posts when appropriate with the tag "insane ingredient." If I don't have it, it has to be pretty out there. In this case, the bread recipe called for malt extract. After a quick search online to determine what malt extract is, I substituted molasses. Malt extract. Good grief.

Visit this week's hosts, Veggie Num Nums and The Family That Bakes Together, for the recipe.
Posted by Chris H. at 8:35 PM 2 comments: 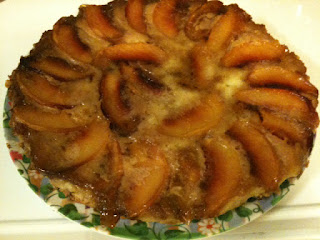 For this edition of Tuesdays With Dorie, I think I need to invoke the McKayla Maroney "not impressed" face. I'm not sure what happened, but this one didn't work out as planned. While I didn't have a 10-in. springform pan, which the recipe called for, I do have one that measures 9.5 in. That seemed close enough.

I ended up with way more cake batter than was going to fit in the pan, so I filled a couple of ramekins with cake batter and baked them off separately. I also decided not to layer in the streusel given the volume of material already going into the pan.

On the plus side, the cake didn't bake over. However, I baked the cake for far longer than the suggested oven time (55 min., believe it or not), and took it from the oven when it tested done. Twenty-five minutes later, when I removed it from the pan and flipped it over -- surprise! -- it wasn't done in the center. I flipped it back fruit-side down onto a parchment-lined baking sheet and popped it in the oven for 20 additional minutes. The cake portion of the event deflated terribly, and much of the brown sugar/butter topping leaked out and puddled in the protective casing of foil I'd wrapped around the pan.

All in all, kind of a disappointment. If I were to make this cake again, which I might just to see if it would work, I would make it in a regular 10-in. cake pan, with parchment on the bottom of the pan. On the plus side, it was edible and didn't taste bad at all. Also, in a fit of amazing efficiency, I made the next TWD project yesterday, and that one turned out great.

Recipe is available at this week's hosts, The Double Trouble Kitchen and The Little French Bakery.
Posted by Chris H. at 10:37 AM 4 comments: