Available to a good home: one double batch of pie dough, separated into four disks, one disk gently used. Amazingly, dough was made without a drop of liquid, aside from that existing in a hyper humid atmosphere.

For this week's Tuesdays With Dorie project, we made Blueberry-Nectarine Pie. You know, pie seems like the perfect summer dessert. What could be better than to harvest summer's bounty of fresh fruits and berries, encase it in a flaky dough, and bake it into a dreamy dessert? Basically, when the weather is all disgustingly hot and humid, it all falls apart with the flaky dough. That's why someone invented cobblers, crisps, grunts, and their ilk: all the glory of summer fruit without the agony of producing pie dough.

So that leaves us with the baking assignment. I dutifully made the pie dough from the book. I decided to make the dough early in the day, before the temperatures got too hot; there was nothing I could do to avoid humidity. I chilled everything. Since I figured it would be quicker, I decided to use the KitchenAid mixer to prepare the dough. Before I got done incorporating the shortening -- after already having mixed in the cold butter -- everything came together like cookie dough. I had ice water ready to go, but didn't need it.

What to do, what to do? I dumped out the ice water, divided the dough into four disks, and put it in the fridge. I then decided that I needed a backup, so I turned to Cook's Illustrated. While I'd never made their vodka-infused pastry dough, I remembered the article and figured I'd give it a try. Again, I had the same problem with cold ingredients become warm so quickly that I had a cookie-dough-like situation instead of pie dough. I added the liquid anyway, wrapped up the dough, and put it in the fridge.

The filling was not a problem, unless you count the horrific blueberry-buying trip to our local Costco, which is currently being renovated, meaning the store and its parking lot are in complete disarray.

When it was time to assemble the pie, I got out a disk of dough, floured it, and placed it on the marble. Unfortunately, it could not be rolled out. I went to plan B and got out the CI pastry. It wasn't pretty, but I got it rolled out and into the pan. I had to patch a couple of spots. Next, the filling went in. Then I rolled out the top crust and got it in place, again with a few patches. 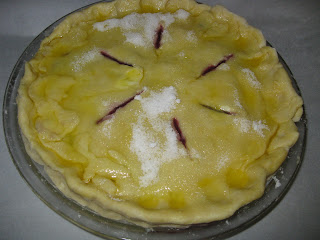 Amazingly, it didn't look too bad. I chilled it while the oven was heating, and then crossed my fingers, held my breath, and popped it in the oven. Forty-five minutes later, I ended up with this: 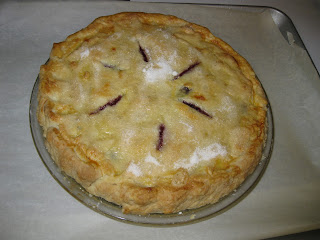 How did that happen? The pie looked great. It smelled great. The crust didn't shrink, despite the amount of liquid I'd dumped in it. 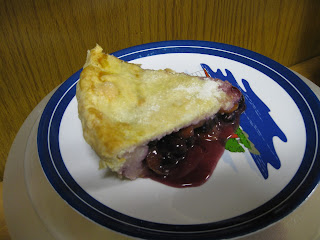 I ended up bringing the pie to work today. After I sliced it, I found that the filling was a little on the runny side, yet the fruit managed to stay together within each slice of pie. All things being equal, the crust was not bad. The sprinkle of sugar on top made it nice and crispy, and it even had a slightly flaky quality.

No idea what I'm going to do with the other batch of dough. Maybe I can press it into small pie tins or tart pans. Now that I've finally tried the CI pie-dough recipe, I feel pretty sure that I'll be using it again. On a dry, cool day. In September or October.
Posted by Chris H. at 11:02 PM 11 comments: 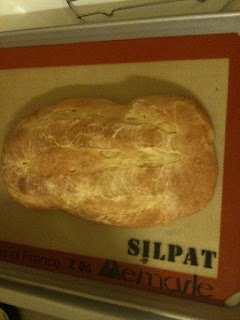 The weather we've been enduring on the East Coast this summer has made baking a challenge. Even having central air isn't much help; the heat and humidity are offensively oppressive.

That said, I was on the brink of bailing on this edition of TWD, then decided that if I got going later in the day, then I might be able to bake after things cooled down in the evening.

For this bread, the dough is pretty sticky. Of course, with the dew point, everything was pretty sticky yesterday. I used the full amount of flour, then added a little more to make the dough manageable.

Because the dough was so sticky, it was challenging to slash the top of the unbaked loaf as directed in the recipe, especially since I didn't happen to have a razor blade handy for that purpose. (Maybe I should have tried it with my Atra? Ha.) I managed to get a few slashes across the top with a sharp chef's knife.

The bread turned out OK. It has a soft crust and a relatively salty flavor. I wouldn't be opposed to making this bread again under different meteorological conditions; it would probably taste good with fresh basil and tomatoes. Since we are in vacation-prep mode and aren't bringing more fresh produce into the house, we are making do by consuming the loaf with a slathering of butter on each slice.

For the recipe, visit this week's hosts at Keep It Luce and The Way to My Family's Heart.
Posted by Chris H. at 12:01 AM 5 comments: 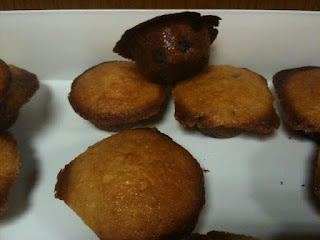 Since I had multiple motivations (ridding the fridge of perishables prior to vacation; kitchen already overheated up for this week's Tuesdays With Dorie project), I decided to make a batch of muffins using the recipe from Joanne Chang's Flour. Instead of two cups of juicy, healthful fruit, I added a bag of dark-chocolate chips.

Aside from a couple of small glitches (such as discovering that my six-cup muffin tin isn't as nonstick as I'd like, even when it's spritzed with Pam), the muffins came out pretty well. I suspect they'd be even better when the humidity isn't out-of-control crazy. 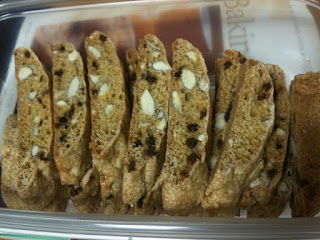 Our latest recipe in the exploration of Baking With Julia is Hazelnut Biscotti. So far, I've tried to be pretty strict in making the recipes as directed the first time out, but I didn't have hazelnuts and didn't feel like buying them. Instead, I decided to use whole almonds: hence, I made almond biscotti. I substituted amaretto for the hazelnut liqueur, and also added a handful of mini chocolate chips.

One of the best things about making biscotti is that you can control the crispness of the cookies. Personally, while I like biscotti, I don't really like the kind that are so hard that I feel like my teeth are going to shatter when I eat them. I made mine just a little softer than that. They still crunch, but I won't need to set up a dental appointment to replace any shattered crowns.

All in all, this recipe (from the most excellent contributing baker Alice Medrich) is enormously adaptable. I could easily foresee a biscotti jag in my future, especially since I now need to use up a Costco-size bag of whole almonds.

If you'd like the recipe, visit this week's recipe hosts, Jodi at Homemade and Wholesome and Katrina at Baking and Boys.
Posted by Chris H. at 8:57 AM 5 comments: