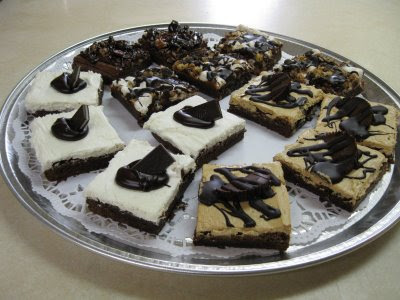 My friend and work colleague Andy has a nice little baking side business going, and has been successful selling scones, muffins, and cookies at several local shops. Last weekend, as part of a big local event, the church where Andy bakes was making plans to do their traditional fresh-doughnut stand, and they invited Andy to sell his baked goods during the event. Andy then asked me if I'd be interested in participating. We've actually talked about doing something like this for a while, but my schedule is often hyperbooked. Last weekend, I knew I would have the time, and I was definitely up for it. We talked and agreed that I would do some brownies and help Andy out with some cupcakes. 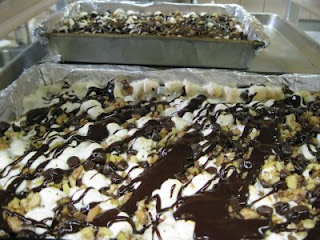 Side note: This was actually the second time we'd baked together. The first time, two of the three things I made -- recipes I've made any number of times -- were complete disasters because I cluelessly used pastry flour instead of all-purpose flour. I was concerned about making sure that everything worked out this time, so I brought a 25-lb. bag of all-purpose flour with me. 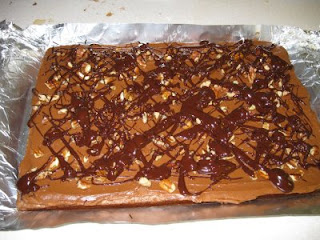 Ready with my most-reliable brownie recipe, I headed to the church kitchen after work the Wednesday prior to the event and made four batches of straight-up plain brownies, thinking of them as a blank canvas for future embellishment. The following Friday, I spent the day baking with Andy. I made a double batch of chocolate butter cream (a more traditional formula that used powdered sugar, which we thought would be more stable in case it was warm on Saturday) and a double batch of vanilla butter cream. The frostings were intended to be used on the cupcakes Andy was making (lemon-ginger, chocolate, and carrot). 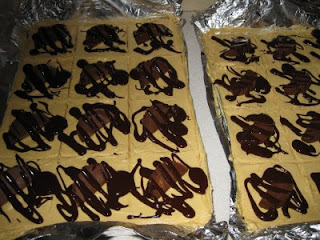 I also made four more batches of brownies, including two with walnuts. The two batches with walnuts ended up as Rocky Road Brownies; the nutty base was topped with a heap of marshmallows, toffee bits, chocolate chips, and chopped walnuts. After they were cool, I drizzled them with a bit of chocolate glaze. Two pans became Peanut Butter Brownies, coated with a peanut-butter butter cream and garnished with half of a peanut-butter cup, then a splash of glaze. Two pans got the mint treatment: a mint-flavored frosting with a puddle of chocolate glaze in the center of the brownie; I stuck an Andes mint into each puddle of glaze. Finally, I had two pans left, one of which had been sliced and tested for quality-control purposes (ha). For the sliced batch, I piped a dollop of leftover mint icing, stuck in an Andes mint, then drizzled some glaze. For the second batch, I covered the brownie with chocolate butter cream, then sprinkled on some chopped pecans. Everything turned out well except for one batch of the Rocky Road Brownies; for some reason, they didn't set up completely in the center. (I suspect that I put too much batter in the pan, although I thought I had portioned the batter equally between the two pans.) 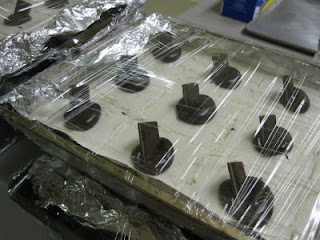 While I like to think that I am efficient in the kitchen, I am pokey compared to Andy. Even though he had a bit of trouble with one cupcake recipe, he managed to produce more stuff than I did. Of course, I also fussed a bit more knowing that this was going to be my chance to see if I could make something that people would not only want to eat but also would have to buy to be able to eat. I give Andy a lot of credit for getting me to think more about presentation. 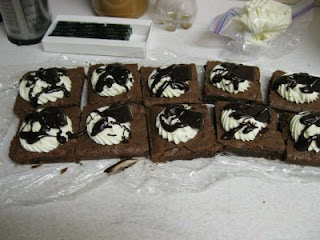 In the end, it paid off. I ended up selling 57 of the 95 brownies I had made, and I know Andy did well with his array of stuff. Getting to see people's responses to the brownie display was incredibly gratifying; watching them enjoy the brownies was even better. I was surprised by the number of kids who went for the mint brownies; I had guessed kids would go for peanut butter first. Go figure.

Thanks, Andy, for letting me sit in on this one, and thanks to all the people who stopped by and had nice things to say.
Posted by Chris H. at 3:14 PM 5 comments: 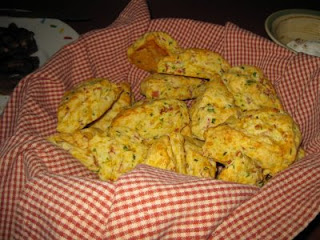 I'm doing a bit of catching up here because last week was busy.

Last Monday, the skating club held a test session, so I got to do my hospitality thing and prepared food for the judges who came in to assess the skaters' skills. The menu included cheese and crackers, cheddar-bacon-chive scones (a double batch, with plenty left for the board members of the skating club to enjoy after the event), black-bean soup with smoked turkey, and a fruit salad (strawberries, kiwi, and mango with mint dressing). Of course, there also were desserts.

First, I had a few pieces of Mississippi mud cake to serve. Also, I made the Classic Banana Bundt Cake from Dorie Greenspan's Baking: From My Home to Yours; I glazed the cake with some ganache I had in the fridge. Then, although I'd been thinking about making something else, I ended up having a batch of leftover brownies, so I dressed them up with a glaze of bourbon caramel, a drizzle of ganache, and a toasted pecan. Voila! Turtle Brownies.

How does one end up with a batch of leftover brownies? At 10:15 p.m. last Saturday, Claire informed me that she needed something for the next morning for her final Sunday-school class ever because they were having an end-of-year party. After the initial shock wore off, I made a quick batch of brownies. The next morning, I sliced and wrapped them. I went to swim and run, then got home around 10:15 a.m., when the party would have been starting. Imagine my surprise when my family returned home at 10:20. They discovered that the party had been canceled because the Sunday-school teacher decided not to have a party after all, then didn't bother to call or email to inform anyone in the class about this decision. (I hope this came up in confession!) Anyway, in this instance, that's how I ended up with a batch of leftover brownies. In the end, I guess it worked out because it did save me a little trouble on Sunday night, and the judges all liked the impromptu Turtle Brownies. 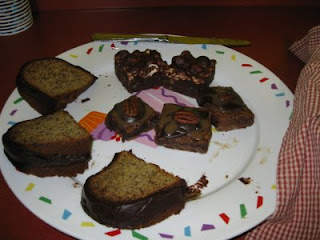 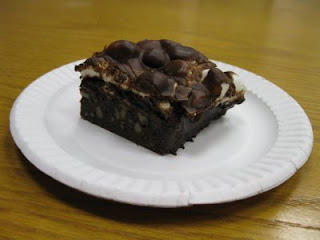 I got two birds with one stone this week for both Lost Lunch Thursday and PLTI by making two Mississippi Mud Cakes, from Nancie McDermott's Southern Cakes. I figured that I really needed to try a recipe from this book other than the Sweet Potato Pound Cake, and the mud cake did not disappoint. While I tend to find marshmallows generally a little weird, they take on a pretty interesting texture when they are coated hot with a warm chocolate glaze. The dense, nutty cake is pretty good, too. Definitely a recipe to revisit, and another reason to endorse this cookbook.
Posted by Chris H. at 12:56 PM No comments: 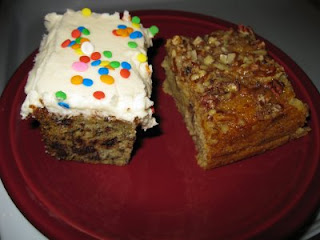 I wonder how many times I've started a blog post with this comment: I had a few ripe bananas to get rid of, so ...

This time, I had enough bananas to make two things. First, I made Chocolate Chip-Banana Snack Cake from Nicole Rees's Baking Unplugged. Although this recipe is designed to be made, well, unplugged, I confess that I used a mixer. (I'm lazy. What can I say?) I had a little vanilla frosting left over from the Cookies & Cream Cupcakes I made last week, so I put that on the cake. It's a nice little cake: not fussy, and it came together pretty quickly. Definitely one to add to the ripe-banana repertoire.

The other bars are Banana Caramel Brownies from Elinor Klivans's 125 Cookies to Bake, Nibble, and Savor. They are a cakey banana bar cookie with a bit of caramel sauce in them. Then after the batter is in the pan, more caramel sauce is drizzled over and lightly swirled in, and chopped pecans are sprinkled onto the exposed caramel. I'd made these bars once before, seven years ago, in fact. I made a note in the book and dated it: "3/20/02 Extraordinary. Butter + flour pan." (I recall that I brought some to share with my pals Brooke and Bill, and remember that Brooke loved them.) I think I won't let seven years pass before I make these bars again.
Posted by Chris H. at 7:18 PM No comments: 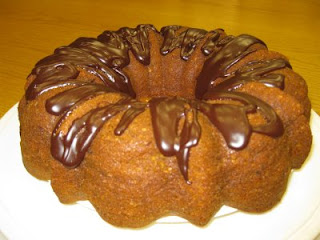 For last week's PLTI class, I made this Quick Banana Bundt cake from the book Bundt Cake Bliss by Susanna Short and Dottie Dalquist. It's quick because it starts with a yellow cake mix (I was a little pressed for time last Wednesday). No feedback on it, either, but maybe I'll get some word when I drop off next week's treat.
Posted by Chris H. at 7:17 PM No comments: 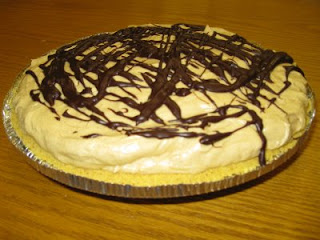 My colleague Tim is moving on to new adventures, so we had a little going-away party for him last week. It was brought to my attention that Tim liked the peanut-butter pie I'd made for a previous going-away celebration, so I made that recipe one more time. I couldn't stick around long enough to be sure that anyone was eating it, but when I saw the empty Tupperware on my desk on Friday morning, I knew that it must have been enjoyed. One of these days, I am going to make one of these pies without another purpose in mind. I'd really like to try a slice of it!

Incidentally, Tim and his wife, Ruth, have an excellent blog, Eat Well, Eat Cheap. Check it out.
Posted by Chris H. at 7:15 PM No comments: