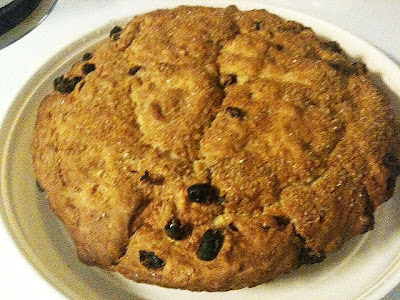 After reading the intro blurb for this recipe, I felt really reluctant to make it. I wasn't enthusiastic about making something that would be "as hard as the Blarney Stone" after one day. Then I saw some comments at the TWD site that indicated that this assessment might have been a little over the top.

It's a pretty simple recipe: flour, baking soda, salt, and buttermilk. To buy myself a little more freshness time, I made a couple of tweaks: I replaced a portion of the buttermilk with 1/4 cup of melted butter; and I also added a cup of dark raisins that I'd macerated in some Irish whiskey.

The whole thing came together really well, and before I put it in the oven, I sprinkled the top with a tablespoon or so of coarse sugar. The soda bread looks like a giant scone. It's yet to be tasted, but it's going to be served at an event less than 24 hours after it was baked. I hope it holds up. I'll report back later on that, and also get a better photo.
Posted by Chris H. at 8:37 AM 2 comments: 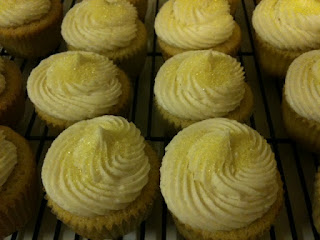 For our third Tuesdays With Dorie assignment, we got to make rugelach, better known as rug unlatch. Thanks, autocorrect! (I don't even know what that means. Rug unlatch? Really?) Since I've never made rugelach before, I was looking forward to getting under way with this recipe.

I started by making a batch of lekvar, the spread that's smeared over the rolled out rugelach. (Lekvar: Was that ever the name of an alien race on Star Trek? If not, why not?) I used apricots for my batch of lekvar as I'm not a big fan of prunes. The lekvar is basically dried apricots plumped in hot water, then pureed with a little brown sugar. To finish, you stir in some finely chopped toasted nuts (I used almonds).

Next up, the dough. It seemed pretty straightforward: a lot of butter, a lot of cream cheese, some sugar. I got that done and in the fridge to chill, then thought about fillings.

I suppose I could have just done a couple of cups of mixed fruit and some randomly assorted nuts for the fillings, but I decided to specialize. Since I had an open bag of pecans and an open bag of sliced almonds, they became my nut choices. I would do one-half of the rugelach with each nut variety. Then, I further subdivided. I knew I'd end up making four varieties of cookies, so I chose four different fillings:

After I prepped all the fillings, I was ready to roll out my first batch of dough.  I was happy with the dough. It was fairly easy to work with and stuck only in a few places. Since the recipe was clear about not rolling it too thin, I did measure to make sure I was staying within the 10-in. by 14-in. rectangle size recommended. 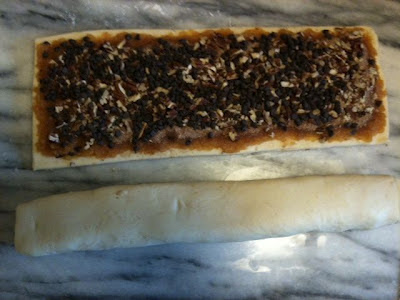 Here, the dried blueberry version is rolled up, and the chocolate chip rugelach is ready to roll. 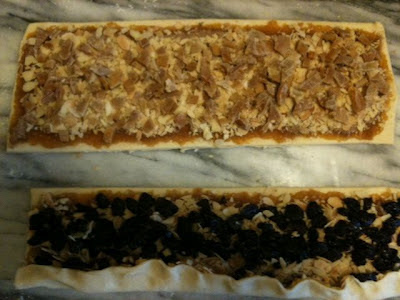 Next up, it was the dried mango and the dried cherry. I rolled the dried cherry dough a little thinner than recommended. I then learned why it's recommended to keep it on the thicker side as I ended up with tears in the dough. Fortunately, I saved the trimmings from previous batches of dough, and was able to patch the holes. 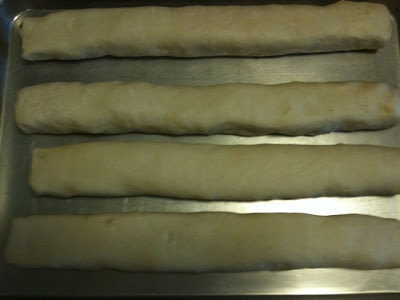 Here are the rolls of dough, ready to chill and rest for a few hours. 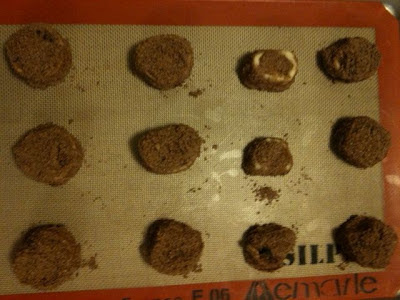 After the chilling and resting (and hey, who doesn't like to chill and rest?), it was time to brush the rolls with an egg wash, slice the rugelach, then coat the slices with cinnamon nut sugar. The ones above are ready to go in the oven. 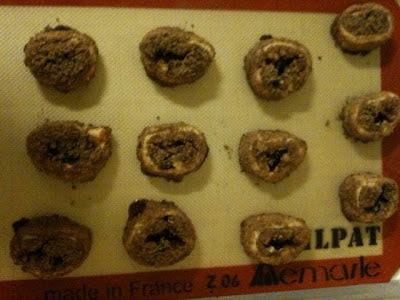 They bake for a fairly long time in a fairly hot oven. While the recipe recommends double-panning to prevent overcaramelizing the sugar in the cookies, I didn't double-pan and didn't have a problem. Actually, the bottoms of the cookies caramelized nicely, and the bottoms are addictively crispy. 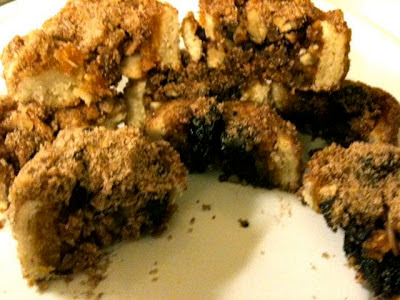 The finished product. They are like little crumb cakes with delicious fillings. The dried mango maybe wasn't the best choice. It stayed kind of tough in the cookies. I probably should have plumped it in some warm water before I sliced it, but it's still kind of fibrous. My favorite is the cherry-dried almond.

While these cookies taste great and look pretty good, I have to say that this recipe was really time-consuming and involved. It's definitely a special-occasion thing, or maybe a snow-day sort of undertaking.
Posted by Chris H. at 5:24 AM 10 comments:

In addition to taking part in the Tuesdays With Dorie project of baking our way through Baking With Julia, I've decided to embark on my own "bake the book" project with Christie Matheson's Simple Cakes. Henceforth, when you see a post starting with BTB, it'll refer to this project. Let's see how long it takes me to get through Simple Cakes!
Posted by Chris H. at 10:14 PM No comments: