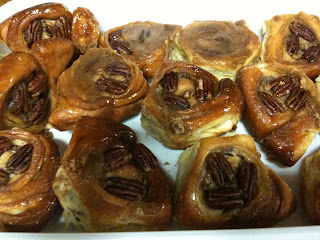 For this week's recipe in the Tuesdays With Dorie project, we made Pecan Sticky Buns. Compared to the Hungarian Shortbread, this recipe was more complicated, involving the production of brioche dough, then a lamination process with butter (a la croissants or puff pastry) to create some nice layers in the sticky buns. The brioche starts with a sponge, which gives the dough a nice boost of flavor. 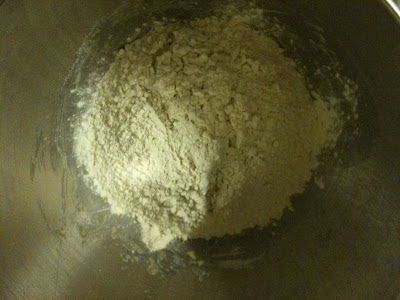 After the sponge is ready, the dough is prepared. As far as making brioche dough, all I can say is three cheers for KitchenAid. The dough rises twice, with the second rise in the refrigerator overnight. After the second rise, the dough is divided into two parts. Each is rolled out, then laminated with butter. I haven't done this process for a long time, and I'd kind of forgotten in which direction to fold the dough for that business-letter process. The rolled-out dough is eventually brushed with beaten egg, and sprinkled with cinnamon sugar and chopped pecans. I ended up with two nice logs of dough, so I must have managed it all OK. 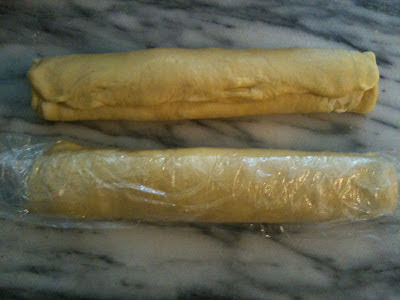 The rolls are frozen for about an hour; then each is sliced into seven portions. The sticky-buns-to-be are placed in a pan in which the bottom has been coated with a stick of butter and a half cup of brown sugar. 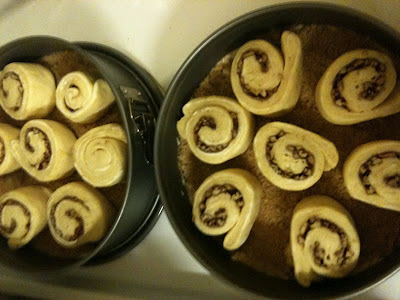 Finally, after rising at room temperature for a couple of hours, the rolls go into the oven, where the buttery-sugary goodness on the bottom of the pan all bubbles up over the top of the pan and drips onto the oven floor, causing a disturbing amount of smoke. Also, after about 40 minutes, you end up with a couple of pans of nice-looking Pecan Sticky Buns. 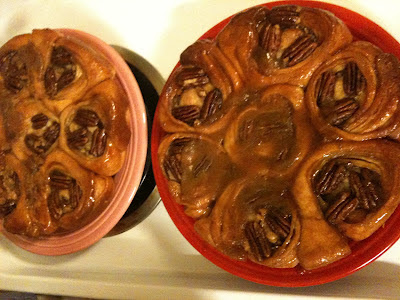 In the end, I had two thoughts about this one:
1. The sticky buns were pretty good, even if the process was fairly involved.
2. I wish I'd baked only one pan of sticky buns and used the over half of the dough for a loaf of brioche.
Posted by Chris H. at 4:36 AM 10 comments:

The latest recipe in our journey through Baking With Julia is Hungarian Shortbread, which featured contributing baker Gale Gand. Of all the recipes in the book, this is one of a handful that had caught my eye when I first purchased the book, although I never did quite get around to making it.

The technique is fascinating. You make a big batch of shortbread dough (unusual in that it contains egg yolks), chill it, then shred half the dough into the baking pan, top it with jam, then shred the rest of the dough on top of the jam. I managed to survive the shredding process pretty well, without shredding too much of my hands and fingers. In the book, the recipe calls for a homemade rhubarb jam. As I was unable to find rhubarb in any local store, I ended up using some Smuckers apricot jam. When the shortbread is right out of the oven, it's coated liberally with powdered sugar. I ended up giving it an additional dousing after it had cooled down as well.

After I divided up my batch of Hungarian Shortbread, I checked in to the TWD discussion of the recipe and discovered two things:
1. I wasn't the only one who had a somewhat goopy center to their shortbread. If I'd checked in ahead of time, I'd have known that I should have partially baked the bottom crust, even though the recipe doesn't say you should.
2. I should check the discussion thread before I bake anything henceforth in this project.

In the end, despite the soft center pieces, the shortbread was utterly edible. I cut it into fairly small pieces, which was a good decision as this baked item is quite sweet. I'll definitely try this again, and the next time I do, I will partially bake the bottom crust first.
Posted by Chris H. at 12:00 AM 5 comments: