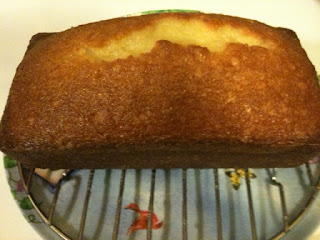 Our latest excursion into Baking With Julia is Lemon Loaf Cake. I will say up front that I have not tasted this cake yet, so I don't know if it's actually good. All signs, however, indicate that I at least have made something edible.

This loaf is sort of like a pound cake, only prepared sort of like a genoise. (I do have to ask: Seriously? 5-1/2 tablespoons of butter? Good grief. I normally embrace the decimal, but not when it leaves me with a weird amount of a stick of butter.) Three lemons' worth of zest gave the batter a nice, citrusy aroma. I juiced the lemons and made an easy brush-on glaze with the juice and some granulated sugar. Rather than heat the glaze to dissolve the sugar, I left it granular, thinking that it will give the exterior of the cake a sweet, crunchy texture. Also, could a little extra boost of lemon flavor possibly hurt?

I'm looking forward to trying this cake. When I was a kid, I felt ripped off if my mom made a pound cake or Bundt cake because -- hello -- no frosting! Now, I love the flavor of a simple pound cake or Bundt cake, glazed or not. I think this realization may have happened while I was exploring Lisa Yockelson's Baking by Flavor, and it certainly came to its full expression while I baked my way through Lauren Chattman's Cake Keeper Cakes and have begun to explore Simple Cakes. I'm thinking that Lemon Loaf Cake will make for a nice dessert tomorrow after lunch.
Posted by Chris H. at 4:27 AM 3 comments: 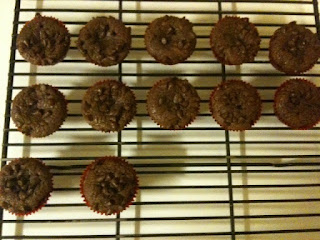 A little something from Abby Johnson Dodge's Desserts 4 Today, a cookbook in which every recipe has only four ingredients. Instead of the called-for chopped hazelnuts, I used mini chocolate chips on top of these Nutella Brownie Bites. Ridiculously easy, and tasty. (Another sad example of a good cookbook that has idled for far too long on my bookshelf.)
Posted by Chris H. at 8:38 PM No comments:

Our latest adventure from Baking With Julia is Pizza Rustica, which came from contributing baker Nick Malgieri, who is pretty terrific. Upon reading the recipe, I became a little skeptical about what this would turn out to be: a savory pie (ricotta, mozzarella, pecorino romano, prosciutto, eggs) in what seemed to be a sweet cookie crust. Also, there was the whole work aspect of this recipe. I don't make pies for a reason: Crust is a nuisance, and also, they require a lot of work for minimal payback in terms of enjoyment in my household.

Then I realized I could dovetail my need to provide food for a skating-club event with Pizza Rustica prep weekend. Few things make my heart beat faster than the opportunity to use friends as guinea pigs for my culinary adventures, so it was decided: Pizza Rustica would be my light mid-afternoon entree-snack-noshy thing.

Although the recipe directs the prep of the crust to be done in a food processor, I used my KA mixer. On the rare occasions that I make a pie dough, I have found that I prefer the way the KA paddle blends the butter into the dry ingredients.

My experience with crust is usually a nightmare, with splits, cracks, breaks, fractures, agonies, pains, discomforts ... you get the picture. After I got this crust in the pie plate, I looked at it and thought: Have I been replaced with someone who can actually handle pie dough? If so, when did that happen?

I trimmed the edges of the crust, then filled it with the cheesy-prosciuttoey filling. Next step was the lattice top. The recipe didn't specify a lattice weave, but after watching Yuzuru Hanyu nail a brilliant long program, I felt bold. I've never woven a lattice pie top before, but for a first-time effort, I'm not displeased with the result.


With the lattice all set, I popped the Pizza Rustica in the oven. I figured I didn't have much to lose and, frankly, was pretty optimistic that I'd at least have something attractive, if potentially odd to consume.

So it was out of the oven, smelled great, and was ready to serve. The reviews were raves. When I finally had a piece, I had to agree. Perhaps not a quad, but definitely a triple axel. My skepticism was unfounded. I'm still not sure that this pizza would fly on the home front, but I could definitely see myself making this again. For that matter, I can see myself making an actual pie, with an actual crust, perhaps even with a woven lattice top. 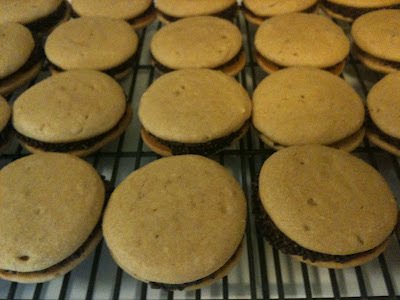 Whoopie pie recipe is from Whoopie Pies by Sarah Billingsley and Amy Treadwell. I used the chocolate frosting recipe from the Buttercup Bake Shop books for the filling. Great combo.
Posted by Chris H. at 4:21 PM No comments: 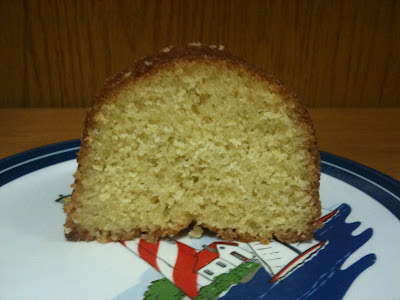 Recipe No. 3 from Cake Simple, Cornmeal Lime with Chile. Only I skipped the chile. I don't necessarily love mixing my sweet with my savory. This cake was fine, but it didn't totally bowl me over. I suspect it would be really good in the summer with some fresh blueberries or raspberries, or maybe as the base for a berry shortcake.
Posted by Chris H. at 4:17 PM No comments: 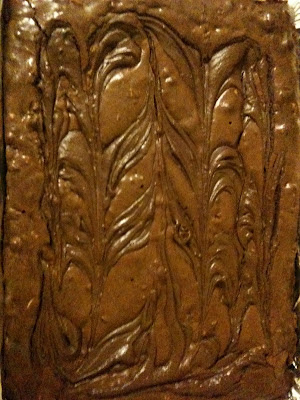 Made these brownies using the brownie app from Fine Cooking magazine. The basic brownie is my go-to brownie recipe. This batch was gilded with hazelnuts, Nutella, frangelico, orange zest, and a cookie crust.
Posted by Chris H. at 4:11 PM No comments: 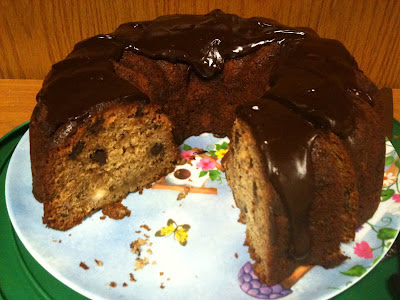 Recipe No. 2 from Cake Simple, Triple Chocolate Banana cake. No complaints.
Posted by Chris H. at 4:06 PM No comments: 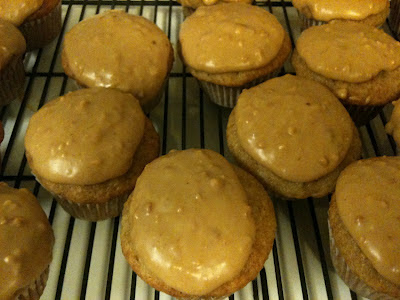 Recipe from the King Arthur Flour website. Good cupcakes, but the frosting was more of a glaze.

Also, I have to give props to this cool search feature on the KA website. Very handy!
Posted by Chris H. at 4:00 PM No comments:

A bit belated here, but I made these cupcakes for St. Patrick's Day. They are, um, the bomb. I don't think I'll be reserving them for Irish holidays. 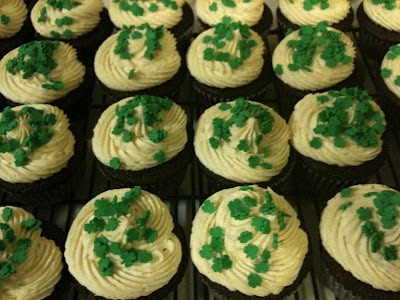 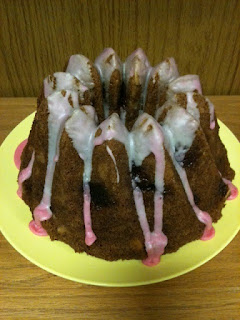 My first recipe from Cake Simple was the Cranberry-Creme Fraiche cake. My mistake was the pan choice I made for this one. It was a bit oddly shaped to handle the cranberry filling. That said, this cake is terrific, and I will be making it again in the fall when cranberries are back in season. 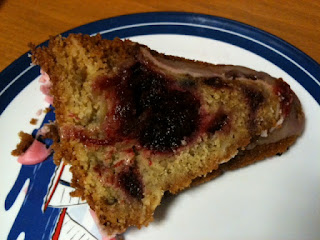