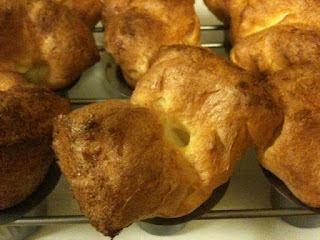 For this week's exploration of Baking With Julia, we got to make popovers. (For me, they ended up being birthday popovers! Or at least day-before-birthday popovers, anyway.)

Fortunately, the temperatures and dew points have calmed down a little bit, so it wasn't a burden to crank the oven up to 425°F. While I've made popovers before, I never think of my own as much as I think of eating them at the Jordan Pond House at Acadia National Park. Tea and popovers are an afternoon tradition there, deservedly so. 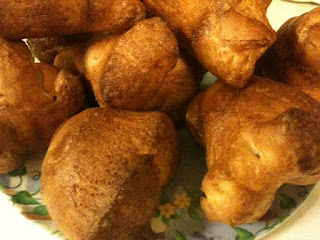 The only thing I didn't do according to Marion Cunningham's recipe is use ramekins for the popovers. I have a popover pan and don't really use it a lot, so I decided it was worth the opportunity to dust it off and get it in the oven. 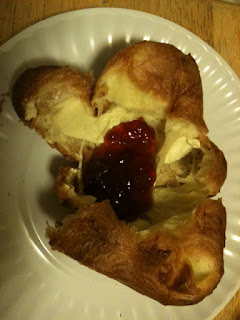 I'm not sure exactly how you're supposed to consume popovers except with butter and jam, so that's what we did. It was kind of shocking how quickly three people consumed a batch of warm popovers, too.

For this week's recipe, you can go to this week's hosts and makers of exemplary popovers, Vintage Kitchen Notes or Bake With Amy.

In one other TWD procedural note, I did make the galettes, but failed to post a blog entry in a timely fashion. I'm aiming to get that posted in the next day or so.