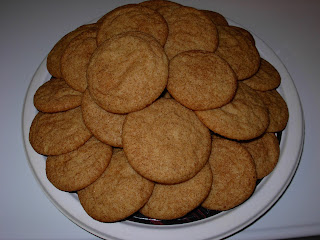 My daughter Claire is in her first year of taking French. She announced last week that her class would be having a Mardi Gras party and that there would be lots of fun foods and snacks to eat during the party. After five minutes of her rhapsodizing, I asked, "Is this your way of letting me know I need to make something?" It's hard to put one like this past me.

Initially, she wanted to bring that old French favorite chocolate-chip cookies, but by the time the sign-up sheet got to her, someone else had already grabbed that one. So Claire signed up to bring snickerdoodles, another classic from the French pastry collection.

I knew I had a reliable recipe from Tish Boyle's The Good Cookie, although Tish calls her cookies Cinnamon Sugar Crinkles. My Cookie Day pal Ryan always makes a batch (or two) of snickerdoodles every holiday season, and Tish Boyle's is his go-to recipe.

So Claire and I made a batch of snickerdoodles, and by all accounts, the French class enjoyed them -- enough so that not a single cookie came home, at any rate.
Posted by Chris H. at 5:29 PM