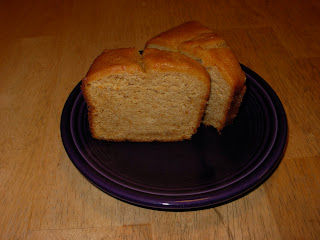 Continuing on with the bakefest from Southern Cakes, today I made Sweet Potato Pound Cake. I started early in the day by baking four sweet potatoes for the cake. While they were baking and cooling, I cleaned out the fridge. (I really know how to live it up on a day off.) The intro to the recipe says that it's a cake "aromatic with spices," yet the ingredient list includes only nutmeg. Although it was difficult, I resisted the urge to tweak the recipe first time out, including not adding some of the warm autumn spices (cinnamon, ginger, allspice) I thought might be nice in this cake.

The cake has a beautiful golden color and a remarkably tender crumb. Even Claire likes it. Go figure. This cake is worthy of revisiting often. Next time out, I think I'll spice it up just a bit. A bit of minced crystallized ginger might be another nice touch (although I don't know how Southern that would be).
Posted by Chris H. at 7:17 PM

Ooh. A very fresh post. I can smell the cake! Cut me a slice, please? Perhaps a little schmear of cream cheese? :^p

:drool: This sounds soooo yummy. And if Claire likes it, it must be fabulous. I want some now.

Thanks for the comments! This was a really good cake.