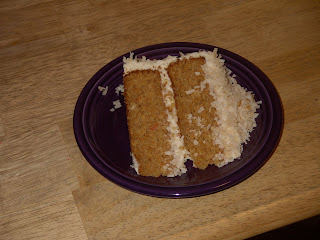 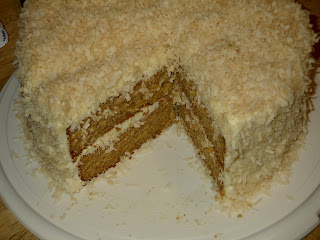 Hi! Having failed at two attempts to keep a written record of my baking adventures, I've decided to try the electronic route to see if I can somehow keep track of my favorite cookbooks and recipes, and also keep a record of those less-than-successful cakes that get a second life as trifle components.

I'm not a professional baker, although I have a professional chef's degree from Connecticut Culinary Institute. At heart, I'm a passionate, eager, possibly (probably) obsessive amateur. I really enjoy trying new recipes and working on the process of baking. I love baking for my family, and they've been pretty amenable to trying most new things. For going on 13 years, I've commemorated birthdays at my office with some sort of baked good. I bring a dessert for "Lost Lunch Thursday," when we "Lost" fans at work get together to dissect the previous night's episode. I also like to bring along an assortment of treats when I'm meeting up with friends at a road race. Among the highlights of the baking year is the holiday-season Cookie Day, in which my running buddy Ryan and I bake Christmas cookies for 10 to 12 hours. It's a major throwdown and a huge amount of fun.

My first baking blog entry: Tropical Carrot Cake from the April/May 2007 issue of Cook's Country magazine. I confess that with each new food magazine that arrives in the mailbox, I immediately scan for the dessert recipes. The text accompanying the CC Tropical Carrot Cake made this one sound enormously appealing, so I put it on the agenda for this weekend. In preparation, the cake lived up to the description in the article, especially the pineappley, coconutty aroma that filled the house when the cake layers were in the oven. The final result: a very tall, flavorful carrot cake. This recipe uses a technique I first saw in a carrot cake recipe by Greg Case in Fine Cooking a few years ago. I love that recipe, which starts with an emulsion of oil, eggs, and sugar prepared in a food processor. The CC recipe also uses an emulsion, only this one includes coconut, which is processed with granulated white sugar. The pineapple flavor comes from a pudding prepared before the cake batter is made; a portion of the pudding goes in the cake, and part goes in the frosting.

Thoughts about this cake: I'm glad I used my deep 9-in. round cake pans instead of the usual Ecko nonstick layer pans; there's a lot of batter for a two-layer cake. I think I'll try this one again, but with a mango pudding. I guess that will tint the cake and especially the frosting an orangey color, but because the cake is coated with toasted coconut, I wonder how noticeable the color will be.

I took a couple of pictures that I will post later. I can't find the right plug to hook up the digital camera to the computer. Ugh.

Edit to add: Photos uploaded on 04 March. I apologize for my food-photography skills. Ha.
Posted by Chris H. at 5:34 PM

Welcome to the show, Chris! I look forward to living vicariously through your baking adventures!

The pineapple thing took me by surprise. Defintely a new twist to carrot cake. Ummmm!

Just how do I order one of these for my personal consumption. Welcome to the blogosphere. Hope that you keep up the great woik. Nyuk, nyuk, nyuk, nyuk. :^p

I see you've added "tags" too. Great start. Let me know when you want to take this national. ;^)

I feel so far away from the cake in the photos. I know it's there, but I can't seem to really get a sense of it.

Definitely a good start to your blog!

Oooh, carrot cake. My favorite! Yum! Could you direct me to the free samples, please. I'd be ever so grateful.

This is pretty cool! I'm hungry looking at these pictures! How do I know this was a real cake? Proof of sample please...:-P