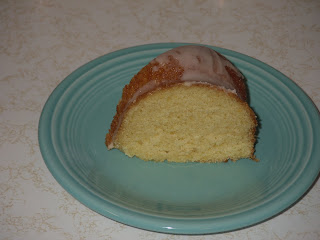 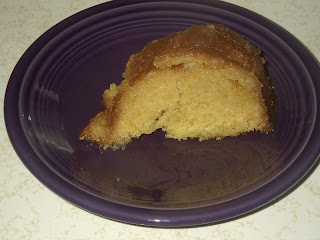 As I detailed in yesterday's post, "The Botched Effort," I had a rough time with Cook's Country's Orange Bundt Cake. Because I still had oranges to use up (I suspect they're multiplying like tribbles), I decided to make one more orange cake, but this time chose a recipe from Abby Dodge's The Weekend Baker. I like this cookbook and probably haven't used it nearly enough since I bought it a couple of years ago. (Note: Abby's dinner-roll recipe -- extremely fondly known at our house as The Bread of Death -- is awesome.)

Abby's recipe for Rich Orange Butter Cake is very similar to CC's Orange Bundt Cake, but there are some differences. I think the two crucial ones are that Abby uses 1/2 cup more flour in her cake, and she uses a lot more leavening (2-1/2 teaspoons baking powder and 1/4 teaspoon baking soda vs. CC's 1 teaspoon powder and 1/2 teaspoon soda). If you factor sugar as a liquid ingredient, Abby's recipe uses less liquid overall than CC's.

The CC cake (bottom photo) has a gummy texture, although to be fair, that is probably a result of my use of glaze as a cake-reconstruction substance. I'll have to make that cake again just for comparison's sake. Abby's recipe (top photo) made a beautiful pound cake, with a tight crumb and nice appearance. And it came out of the pan with no undue coaxing. Thanks to The Weekend Baker, I had a respectable orange Bundt to share with some friends this evening.

Props are due to my sous chef, Claire, who assisted with the juicing of the oranges for the second cake.
Posted by Chris H. at 9:28 PM

Mmm, that looks good... Also, I'm wondering what the "bread of death" is like...

Bread of Death is awesome.

The icing looks very yummy. I can't look at a Bundt without saying "boon-dt" as in "My Big Fat Greek Wedding"! Ha!