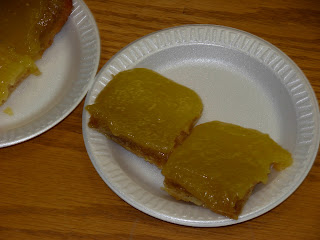 When I make lemon squares anymore, they are a complete disaster. For many years, I used a lemon square recipe by Emily Luchetti. It had always worked until the last few times I made it. (Clearly, the problem has become me, not the recipe!) Because I had some lemons that were close to turning the corner, I decided to try a lemon-square recipe from Tish Boyle's The Good Cookie. Zesty Lemon Squares had a lot of appeal: plenty of lemon juice in the filling, plus a brown-sugar crust spiked with crystallized ginger. I followed the recipe, and I think that was my undoing. The crust is baked before the filling is poured on it. I allowed the crust to cool before adding the filling, and apparently, the crust contracted enough that the filling all oozed under the crust.

Serving the bars was essentially a rescue operation. I flipped the baked bars over onto a cutting board, and served them upside down. They were very lemony, as a good lemon square should be, but they definitely were not something to pick up and eat out of hand.
Posted by Chris H. at 12:10 AM