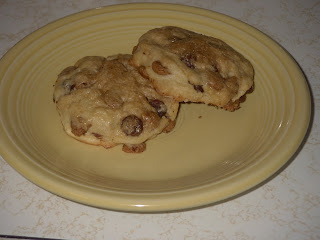 Heat. Humidity. Summer doldrums. It’s the saddest time of year for a baker.

I’ve been wanting to bake but, because of the weather, have been feeling slightly uninspired. Nevertheless, like a junkie needing a fix, I’ve made a few things over the past couple of days. (I apologize in advance for the lack of photos. Camera has started to act weird.)

On Tuesday night, after slogging through a lawn-mowing session, I made Chocolate Chip Scones, using a recipe from the King Arthur Flour Web site. The recipe called for their Mellow Blend pastry flour, and I happened to have a bag of it stashed away. The scones were nice and tender, but I think I patted the dough a bit too thin because the scones weren’t as tall as I’d envisioned them being. 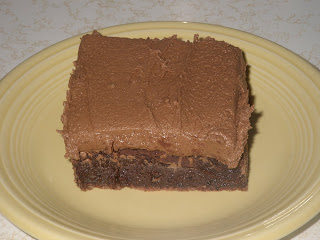 Last week, during a visit to the library, I borrowed The Deen Bros. Cookbook: Recipes from the Road, the new cookbook/travelogue by by Jamie and Bobby Deen with an assist from food writer Melissa Clark. It’s a culinary voyage across the country, containing a mix of savory and sweet recipes. Last night, I tried a couple of things that had caught my eye, both recipes from Butters Brownies in Austin, Texas. The first, espresso brownies, are superb. The batter went together nicely and had a good coffee flavor. The brownie baked a lot faster than the recipe indicated, though, done at more along the lines of 30 minutes instead of the 35 to 40 that was directed. After the brownie has cooled, it's finished off with a batch of espresso and Kahlua-laced icing. Brilliantly excessive.

Then I made a batch of brownie cupcakes. Their recommended baking time was 12 minutes, but even after 16 minutes in the oven, they were underdone. It seemed like 18 to 20 minutes was more appropriate. Perhaps the baking times should have been averaged between the two recipes. These cupcakes are for Karen to take along on a work picnic.

There are a couple of work birthdays coming up in the next 10 days or so, so I’ll either be baking (after having been hoping for cooler weather) or I’ll be working up some treats requiring refrigeration but not baking.
Posted by Chris H. at 10:11 AM

Expresso brownies were, in fact, "brilliantly excessive". I won out and got a whole bunch of these. Yum Yum and Yum! They are indeed rich...mostly due to the frosting. Even "I" had to split one over the day! But they freeze well, so can be doled out in doses for over a week! :-)