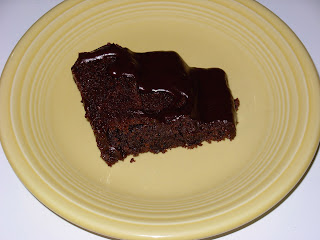 My running buddy Brendan is getting married in a couple of weeks, and his birthday falls roughly the week after the wedding. In other words, he'll be away when we would otherwise celebrate his birthday after a Sunday-morning run and then breakfast. I decided that it would be OK for us to celebrate a few weeks early.

Knowing that we would be in for some too-early-in-the-season-for-it-to-be-this-disgusting weather, I looked around for a cake I thought would be sturdy enough to be in the car for a couple of early-morning hours while we ran. With a couple of extralarge eggs to be used up from a dozen I'd bought for the Lost lunch season finale cake, I centered my focus on a book whose recipes are formulated with extralarge eggs: Chocolate American Style by Lora Brody.

Perusing the cake listing in the index, I saw a chocolate pound cake. That would fit the definition of sturdy, so I went with it. Blessedly, the cake is formulated for a 9.5-in. Bundt pan, which meant I didn't have to use the big same-old Bundt pan; I used my star-shaped Bundt for this cake. I zested a couple of oranges into the batter for an extra bit of flavor, and I glazed it with a tried-and-true glaze from Elinor Klivans's Fearless Baking.

Because it was so hideous even today even at 8 in the morning, I brought the cake into our usual Sunday-breakfast site, and we ate it there after breakfast. There's nothing like chocolate cake before noon, much less a good celebratory reason for having it.
Posted by Chris H. at 9:16 PM