More of the Same

I'm in a baking rut, it seems. I made another pound cake for the PLTI class and cupcakes for "Lost" Lunch Thursday. 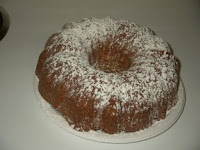 The cake is a lemon Bundt, a recipe from a Land O Lakes butter ad. (Shrug. What can I say?) It's pretty minimally lemony (zest and a tablespoon of lemon juice), but it's not a bad pound cake at all. It's moist, it's buttery, it even has a hint of lemon (definitely a background player here, not something right up front). 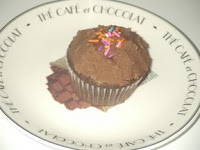 The cupcakes are from Dede Wilson's Baker's Field Guide to Cupcakes. After last week's sunken white-chocolate cupcakes, I figured I needed some redemption and made Dede's chocolate cupcakes. The cakes are really good. However, the fudge icing I chose to coat them with? Not so much. The icing seemed promising when it was done coming together, but it took on a firm, fudgelike texture almost immediately after being made. On the one hand, it was fine; the frosting tasted great. On the other hand, it was pretty much unworkable. The cupcakes are definitely on the redo list, but next time if I want chocolate icing, I'll make a fluffy chocolate icing.
Posted by Chris H. at 9:14 PM